The Bachmann /Mainline 204HP Class 03 has been around since the 1980s and has dropped in and out of the catalogue ever since; there must be thousands of them out there. It was pretty cutting edge technology at the time featuring a heavy split-frame chassis giving a running quality that was way in advance of any contemporary model diesel shunter. They're a pretty rugged beast and need little maintenance.  This particular example is one of the early Bachmann production and was bought second hand; the jackshaft drive has been lost along the way, but this doesn't notice to much being hidden behind the rear steps. The running was getting slightly rough, so time to give it a clean and lube. 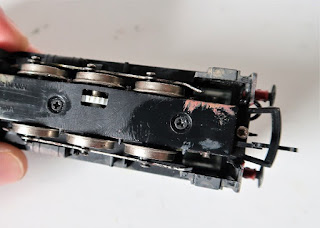 Cleaning and greasing
The wheelset can then be lifted out as one. The U shaped axle bearings should be cleaned out with a dry tissue to clean out any grease and swarf. Then a tiny amount of plastic-friendly grease should be smeared onto the plastic gear wheels in the centre.

One of the great advantages of the split-frame block design is that at this point you can drop the entire thing onto a length of track, gently turn on the power and the motor will (or should) turn freely and spread the newly applied grease over the gear teeth. Remove any excess with the tissue. 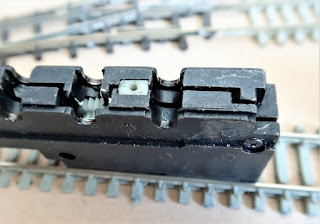 Oiling
The axle bearings should now have a tiny drop of oil such as electrolube added at the foot of each 'U'. This really should be an absolute minimum and should not be allowed to spread anywhere else. 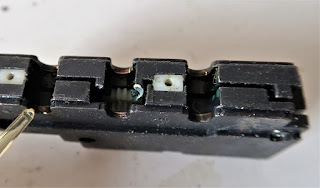 The Wheelsets
Here the wheelsets themselves were in a bit of a state with several years worth of accumulated grease, dust and muck caked around the back of the wheels. This needs to be cleaned off, but be wary of using any spirit-based cleaning fluid in case it attacks the nylon axle muffs. Here I just used a dry tissue again. The wheel treads were also cleaned at the point. 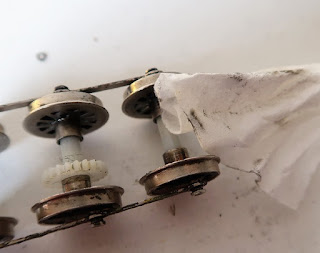 The wheelsets can now be refitted and a tiny amount of grease added to the axle gear. The nylon axle muffs will split over time. This is ongoing problem with many Bachmann products and it's worth searching out a few spares. In this case the rear axle was just starting to split, but not the point where it needed replacement. 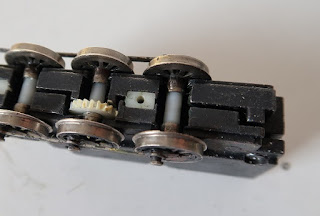 Clean the inside of the plastic keeper-plate and re-fit. Before the body goes back on, give the loco a slow run up and down on a length of track to spread the grease on the gear and to check that there are no sticking points. If all is well add the body and couplings.

Most of the Mainline and Bachmann locomotives contemporary with this will use a similar assembly and can be treated in the same manner.
Posted by Chris Ford at 01:18