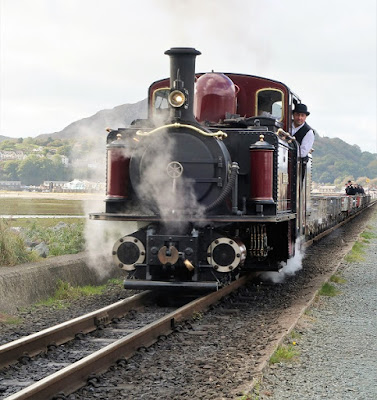 I'm not a fan of repeated 'holiday' break destinations, but this is the forth year in a row that we've attended this event. I should point out that it is Mrs F. that drives the booking of it, and not me. It's up to the limit running by the preserved line with all the useable steam power brought into play. This does mean that any small problem causes delay and there was a running coal issue throughout the weekend causing some slipping of times. This actually doesn't matter in the slightest as the atmosphere surrounding the event is overwhelming with people decked in period costume and there being a general continual shifting between bar area, platforms and trains in an almost random manner. You just hop on what ever train is running and bundle into coaches the best you can. It's very much enthusiasts and not the usual family groups so nobody cares much - or not that we noticed anyway.

Mrs F spent most of the time in the bar filming and photographing to shift straight onto Facebook and will happily sit at the lineside waiting for the next up freight to point the camera at, with me shuffling my feet and wanting to move on. One or two of these may appear here later.
Posted by Chris Ford at 10:46