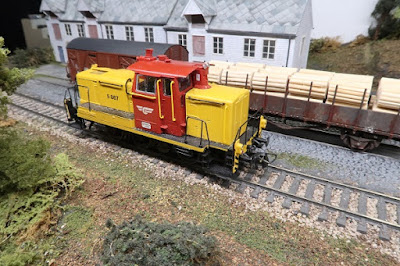 To Poole. Which we found after a short search. I'd never been before either as an exhibitor or a punter. Fairly traditional club show aimed at a general family audience, with a mix of styles from 2mm FS to a Paul Lunn trainset plan with multiple Metcalfe kits and very tight radii in 3'x4' - guess which was my favourite out of these two? Only 3mm was missing from the roster.

Svanda (with new LED lightling) behaved well as usual with only an odd back-feed fault on the points in the FY which disappeared as quickly as it arrived. Above is yet another Di5 that's un-weathered produced from Nigel's Mary Poppins handbag. I thought I'd done them all, but they keep appearing. As suggested by a couple of people, Svanda now has a page here .

We were set up next to Matthew Keen's exquisitely finished Garreg Wen 009 layout (below) which shows everyone else's modelling up. Don't you just hate clever kids? There was a range of box -shifters, but with a lot of things that had disappeared from the market - there was a whole box of P-P fitted M7s @ £75 each, one of which found its way into Nigel's boot on the way home. Well it seemed rude not to.

The catering was a bit basic, but there was a river of tea and the team were friendly and helpful.We may return next year. 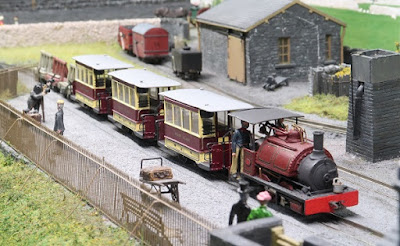