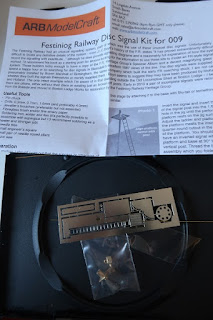 I think the word I'm looking for is scramble. Due to other factors the planned Welsh NG book is way behind and I'm typing as fast as I can to catch up. The trouble is that if it was just down to typing there wouldn't be much of a problem. The spanner in the works is that I have to actually build stuff.

I note from the other items from the same publisher that there is a definite reliance on using photos from the camera of other people. One I have to hand contains a large number from Peco including one of mine and Nigel's layouts. Even if they're crap at least I do my own blow-by-blow shots.

Anyway. Onward to the next item which is probably the last of the stand alone projects this rather dinky disc signal which was originally from the Chris Veich stable.

But first to clean the bench of coffee stains and paint.