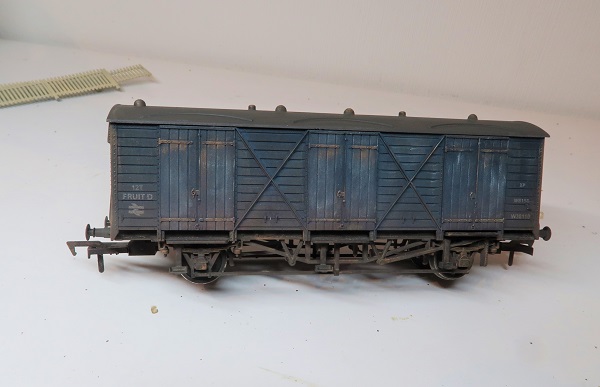 In a hypocritical moment from the last post.
As mentioned earlier there is a very slight rush to get a few items of stock ready for Hopwood's first proper outing at East Grinstead. As the root traffic is DMUs and parcels stock, a couple of things have needed to be bought and mainly s/h.
This caught my eye on the Hattons site. It looks to be a Wrenn body mould and a new underframe. The later is stunning, but then I don't buy a lot of current RTR so maybe those that do will be unimpressed. £17 + p&p brought it to my door which is the most I've spent for ages. Naturally everything else got put to one side, while I fiddled.
The usual glance though Bartlett's photos pull up a couple of blue liveried versions, so I worked from those. Slight rusting on the upper ironwork, a cruddy brown/grey underframe and silvering on the doors where the paint has worn through. Three colours and two cheap brushes got it done.
Posted by Chris Ford at 02:00