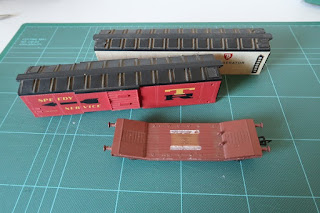 A little while ago my father-in-law passed away. He'd done a bit of railway modelling years ago, but had changed to R/C boats. In one of the drawers in his office we found his railway junk pile. Mostly pre 1980s items and quite a mixed bunch. A lot of this was probably worth a fortune to collectors, but who cares, so about 80% went in the bin or has been passed on to a couple of people. I kept a few selected pieces of interest. The Tri-ang quasi-American box cars were running on the dumb axle bogies. These were levered off and thrown. There has always been a possible US layout on the cards as I have the stock and these could be re-purposed as background scenic items if suitably doctored.

The Airfix Lowmac appears to be a very early example and is quite crude in places compared to other wagons in the range. However, with some paint and a load of sleepers it would drop onto Dury's Gap and be an awkward shunt. 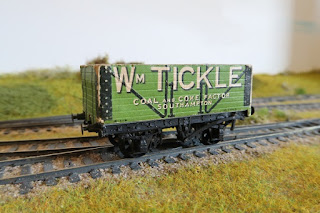 This was the peach of the pack. Hard to date, but I believe the Peco Wonderful Wagons were produced from the 1960s until quite recently. The chassis is way ahead of the curve and would have put its contemporaries to shame.

The top half is a curate's egg. A mazak box with holes to 'melt' the chassis pegs into and then card overlays which extend the box upward - in this case to 7 planks. This means that the top three have begun to move inward. I recon this is worth a restoration. My only problem would be trying to get styrene and some Bachmann tension-lock couplings to stick to the slippery engineering plastic of the chassis. 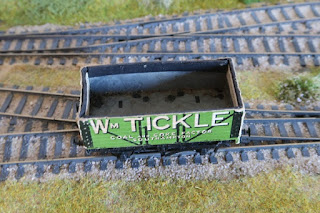