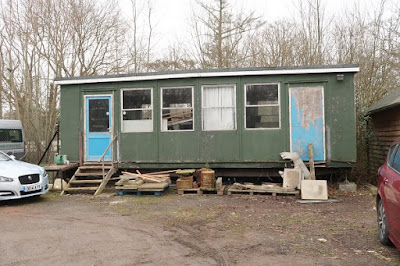 I'll bet that there are a goodly number of people that like me spent a large chunk of their school years freezing their nuts off in one of these. In my case there were three of them sitting on an annexed part of the tarmacked netball court against the perimeter wall, where they became part receptacles for any stray fag packets, beer cans and other detritus thrown by us or passers by. I seem to remember we burnt one down one summer term, Probably to win bets on how long the fire brigade would take to turn up.

Not quite a portacabin, but a close cousin and usually propped up on piles of bricks presumably to keep the rats out (or in) and relied heavily on ply and T&G for the construction. This example at a school in Tenterden looks as though it's been moved from somewhere to it's resting place here at the edge of a muddy car park. Some of it's brick legs have travelled with it and are dumped in front. What's holding it up is anyone's guess.

I can't seeing Wills producing one, but with the portacabins now out in card form, the temporary classroom can't be far behind.
Posted by Chris Ford at 05:00