Damned lies and the French 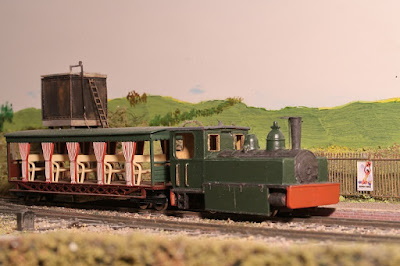 Well now that the PPE has now arrived from Torquay after not leaving on the day before we'd first ordered it. What was it? Lies, damned lies and statistics? Well we're all living that now.

Back to reality. This appeared quite some time ago in a box brought over by our Mr. Hill. It stayed on the shelf for a goodly while and is a conversion from the body of the Liliput HOe loco of about 30 years past. I took a few bits away and added hinges, one of those faintly ridiculous Gallic chimney caps, some beading and then threw some paint at it. It needs crewing, works plates and some Greenwich couplings and runs on the expected Kato 103. It may be the first loco on the long planned French 60cm layout, but don't hold your breath.

Red Update: FYI the bufferbeams here are a special red mix of the usual Humbrol 60 and about 30% of the cheap Craftsman paint that comes from The Works in shite brown. Darkens slightly (no surprises there) but improves the coverage. The quest continues.
Posted by Chris Ford at 09:37