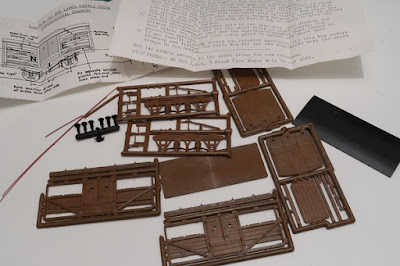 Slightly on the back of the last but one post and because maybe it's time for another build project on here, I had a rummage in the box. What came out (second, first was another Cambrian 16 tonner) was this Westykits LNER cattle wagon purchased a couple of years back off a club stand for £4.80. Cheap, old, different.

I don't know much about Westykits though this was marketed by, and possibly made by Ian Kirk. The question that I'm asking is, is this the same as the LNER cattle sold by Parkside (now Peco)? I tend to think not, though there are links. This is not the crisp moulding of Parkside. The diagram is dated as 'drawn by PMW 1980' making the kit 40 years old.

First impressions are good: it looks to be all there, in fact more than there as there are six buffer parts. The instructions are of course typed and copied as was the style then, and are backwards for me starting with the bodywork. The stand-out phase is, '...unless you are batch-building go and have a fag or a cuppa to give the plastic a chance to harden.' This is what is surely missing from modern kit instructions, encouragement to develop lung disease.

I could probably build this quite quickly, but I'll slot in in amongst the other bits and run it over a couple of posts... after I've had a fag...