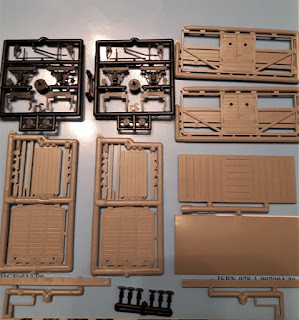 Part of the interest of building this kit was some of the research. My assumption that there was a link through to the current Parkside kit of the same beast may be tenuous. Stig emailed me the above snap of the newer animal. There are similarities, but only the bodyside sprue resembles the Westykits version. The roof, floor and chassis are new and the ends, while similar, have at the least been realigned on the sprue. The whole lot seems crisper as well. The chassis is the main winner with the far more logical clasp brake set up. Even in 1927 this was regarded as a better bet and most of the vehicles were converted. For the kit manufacturer this means it can breeze into nationalisation. 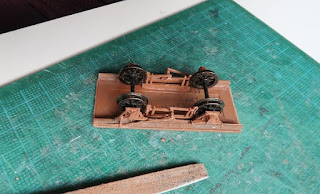 It all got a little modeller's licence at this point. The supposition was that the van had made it to the late 50s, but hadn't been converted to the clasps, but had been upgraded to single-sided Mortons. It's ended up on the line as a quasi-internal vehicle going no further than the junction. I take inspiration from the LBSC vehicles that were hanging around on the Newhaven West Quay line into the 60s, but surely didn't venture any further. 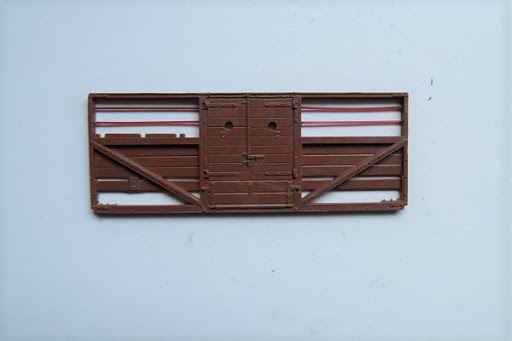 I 'notched' the back of the sides for the guard rails. The plastic was curvy so a bit of stretching and curved down rather than up was the aim. The bend due to some ambitious bullock doing pull-ups on the bars on the way to the abattoir. 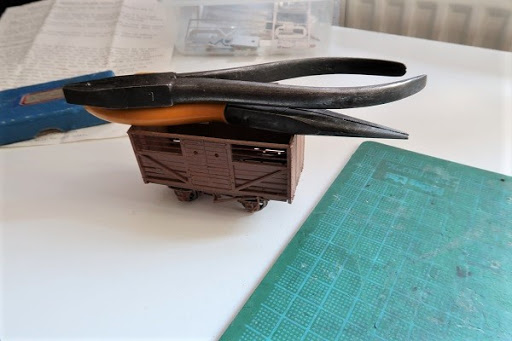 Putting the body on was a real juggle while I tried to pull the wind out of the chassis. Tried...                   I fixed a long piece of sprue on the diagonal across the floor fixing one end, then the other while flexing then weighting. This worked to a point.  Lastly most of the church roof was stuck to the floor alongside it.