N gauge in a box 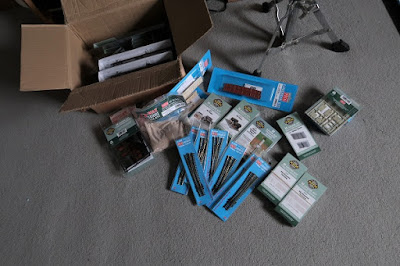 A couple of boxes arrived from that nice Mr. Haynes. The N gauge was slightly dodged last year in favour of the O in the form of Oake. As I mentioned a couple of days back, it raised its head and most things will be back-burnered in favour of this for the next couple of months.

This is the plan B version. Plan A was something based around the Roy Link plan for Hampton Lode on the SVR - double track through station with storage loops at the back. For various technical reasons this wasn't possible so and urban through terminus is the new design.

As with all these things I don't tend to try an reinvent the wheel; why bother? and I'll use something that is proven, albeit in a different scale and gauge. In this case the often drooled over EM gauge Elm Park, which has sadly disappeared, but is available in a few youtube clips. The working shape is for an N gauge homage in 1,200mm length. The target again is Warley, however... The difference this time is that technically speaking I have to do this within the 9-5 window rather than a open-ended spread of working hours. This being curtly pointed out by Mrs. F. as I opened the box outside of this window.

I did say 'never again' with N gauge. We'll see how I get on.