A trip out. It's good to try somewhere new and the Bressingham gala/steam rally seemed worth a punt. Without going into reams of back-history which you can get elsewhere, in a nutshell, it was a nursery with a small railway and is now a working transport museum with a garden centre tacked on the side. It doesn't take a genius to work out that for couples of a certain age, this is a damn fine combination. 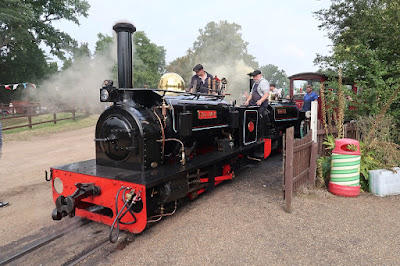 This day all the toys were out and the air was thick with steam engine output from traction engines, steam threshing machines, miniature versions of these, three (2', 15", 10 1/4") narrow gauge lines and a short section of standard gauge. All good stuff... with one small issue. 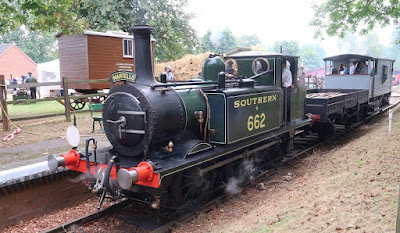 The terrier with the 2 plank and LMS brake shuffled up and down on a few hundred yards of track which was nice, but seemed a bit of a waste of a useful engine. I'm guessing that this is not the usual practice on ordinary days. It was a bit of a Hunslet-fest with two running on the 2' line either individually or coupled together. What caught my eye was the interesting VB machine which I hadn't seen before, but a quick bit of googling told me that 'it was put together from various bits and pieces'. 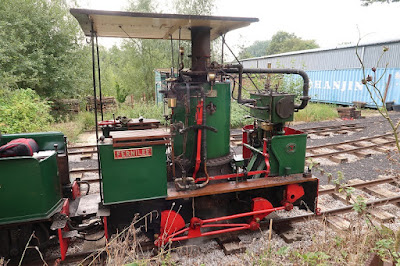 The site is very large and open with more or less free movement; none of the 'don't touch that sonny' that you get with standard gauge lines that appear to be much more taken with over the top health and safety than the NG lines do.  The only fly was the catering. Queue up for ages then a 45 minute (yes 45) wait for a sandwich and a cup of tea to be delivered. Yes it was busy, but isn't that the point of holding these events? Isn't busy what you are aiming for? A couple of period type outside catering type vans would have added to the vibe and taken the weight off the resident staff. If the system isn't coping, change the system.

Basically pretty good, but my tip would be to take a picnic.