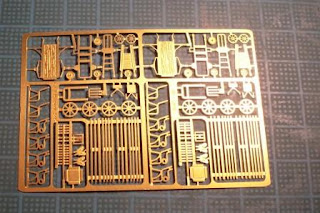 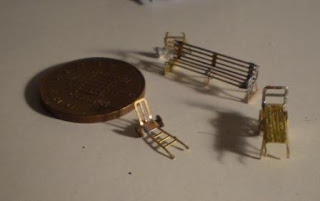 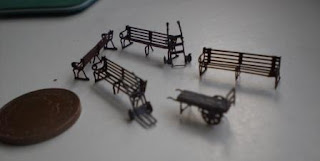 Away from the frivolity.
I was going to do no more work in 2mm scale. However.
It was decided to add some platform furniture to Unnycoombe and some questioning at the Uckfield show pointed us in the direction of Shire Scenes and these little beasties. Nigel mail-ordered and then on discovering that they were nice shiny brass that needed soldering, threw them my way.
I started with one of the smaller sack trolleys (or 'wheels' as we used to call them) to get my eye in. I made a bit of a hash of it but moved on. Result: three trolleys, and four bench seats.
The instructions; after asking you to recite Monty Python's Parrot Sketch (I kid you not) suggests making a jig. I always think jigs are best left to the Irish, so used a bit of blu-tack and my finger, which now has a bench-end branded into it.
Remind me that I don't do 2mm...