In an effort to keep things tidy and as a follow-on from the last post here's the Schoma on it's intended home. Novington Pits was very much an experiment. I'd got interested in 14mm gauge via Roy Link's Review and thought to have a go. I didn't have the cash for some of his more expensive kits, but could run to a couple of Wrightlines spuds. For the unaware these are basically a 24.5 Tenshodos cast in white metal with the motor mounted on it's edge to allow either 14 or 16.5mm gauge. This makes them taller which is OK for the 7mm industrials which they are intended. 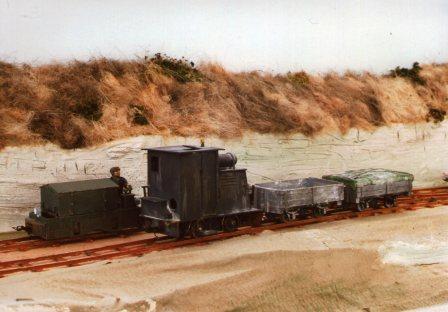 The photo (the only one I have from 1996) shows the unfinished layout: a mix of MDF and ply, and track soldered up from copper-clad and code 80 rail to suggest Hudson Jubilee track. The wagons are card on top of 3mm scale w/m wagon chassis. The layout was tossed at the public twice then quietly abandoned. Even with the extra weight of the casing, the spuds still have the warp-factor acceleration of the Tenshodos, sharing the same motor and direct 1:20 or less gearing. I learnt all the lesson here that I should have applied, and didn't, to Froxington a decade later. That being that spud drives and me don't get on. All the stock is still in existence except Pete Smith's battery electric kit which has disappeared.