With some relief I can announce that the Airfix Spitfire is done and has been delivered to deepest Mid-Sussex stuffed and mounted on a piece of MDF coated with Woodland Scenics. 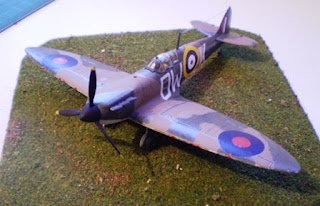 Conclusions: Compared to your average 4mm wagon kit you get quite a bit for your six quid. Apart from the previous gripes I found that the canopy plastic was a little brittle and I'd have been better off using a razor saw rather than a craft knife to remove it from the sprue. This, like a the previous small problems, would be solved on the second kit; it's a learning curve. The transfers are comprehensive and in a lot of cases almost invisible. To the point where even the most pedantic could leave a few off. I did wonder about the squadron marks which seemed about 10% too big compared to the prototype photos I have. The box art shows them skewed off like a drunken bass-player - I followed this, though they don't look quite right to my eye.
Would I recommend? Yes. Would I build another? Probably not. The room for manoeuvre is small and there are no spare bits. The difficulty of modelling a prototype to any degree of accuracy is quite high compared to the ease of the lazy make-it-up world of the freelancer. However as a side project it has a lot to give.