Not a comment on the financial sector... well perhaps. Regulars will have noticed that there is not of money spent on modelling here at Wood End Towers, in fact the buying of materials is very much discouraged. This is a case in point. 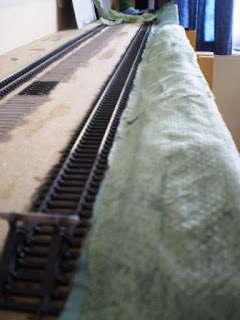 Possibly a little early in procedings, being that it is the front of everything else I decided to put the groundwork in along the leading edge.

Formers were added from scrap card to match the fascia board and the gaps in between filled with a little screwed up newspaper. I tend to use whatever is to hand for this and the 'inner layout' is like a snapshot of whatever I threw in the bin the day before. I'm very aware of this and muse the reaction to whoever rips the layout up at some future point of time. I seem to remember that Wood End was full of crisp packets and condom wrappers. (I'd never get that sentence past a magazine editor) so goodness only knows what Alan Martin found when he re-built the corner section. I hope he wore gloves.

The top layer is the tissue paper that you get in public toilets - well that's where I get it from. A little more difficult to get these days with the increasing use of electric driers. This is of course technically theft... well it's only going in the bin ain't it? About half a dozen sheets used here. This is cheaper and a bit less messy than any other method especially the polystyrene foam game. And for medium to large areas it is hard to beat. 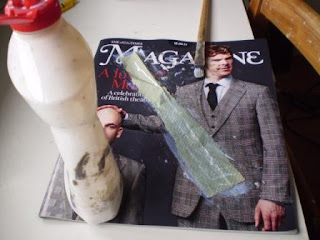 The paper is torn into 1" strips and 'pasted' with watered-down cheap craft shop PVA and a pound shop brush on a shiny magazine (peels off easier). Then laid over the formers and rubbish. The first layer looks awful, but the second smooths it out and the final looks OK. When dry it's coated with matchpot emulsion to seal.
This gives a hard shell to scenic over. And while you couldn't stand on it it's firm enough to plant things in.
Occasionally the edges will lift, and have to be repaired with a little UHU, but other than that it's foolproof.
Cost.... virtually zero.
Posted by Chris Ford at 12:10