I seem to like tedious jobs. And most involve cardboard for some reason. The 'lifted track' on the bridge looked OK so I thought I would do the same through the body of the layout. The historical background for those that haven't spotted it, is that Rhiw is a 'new' station. The old site has been developed and a new platform built a few hundred yards down the main line which has also been singled. This seemed relevant to the South Wales valleys which were having cash thrown at them in an effort to regenerate during the 80s. 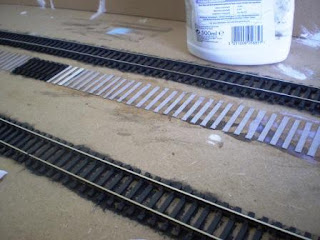 So there has to be evidence of the lifted down line. I've used the same technique(!) as the bridge. That is; strips of thin card cut roughly the same length as the PECO HO sleepers and slightly under-width to match the spacing, covered with sticky emulsion. The card is from tights packets again, and is no more that 1/2mm thick, so that when the whole lot is covered in scanky ballast and weedy flock there should be a very subtle regular undulation reminiscent of the ballast pattern on lifted lines.
This has to be almost un-noticeable otherwise it won't work. If it doesn't, I can always get a wide chisel and take the whole lot off.