Nigel sent this this morning: Post modernisation plan Unnycoombe. Brand new and out of the box runs very smoothly and bought as a replacement for the AEC railcar which has developed the Farish click. 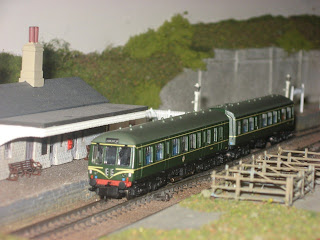 The AEC will in time be updated with a Jap' mech, but with art replicating life, the first of the British Rail units ends up on Unnycoombe.

The thrust of the project was that it was to be a GWR branch terminus that wasn't too typical, but then it is in a way. The 55-65 period was chosen deliberately so that it wasn't the chocolate and cream dream world. The use of the Hymek and DMUs only reflects the period and of course, like much of the layout, have been well served by the trade of late.

I was going to talk about Stalin-esque five year plans not Modernisation plans, but that'll wait.
Posted by Chris Ford at 09:32