It's become apparent over the years that I refuse to use any bit of commercial scenic kit as intended. In the top drawer I discovered a PECO buffer stop in a packet - unopened - a virgin buffer.  From Cove Models no less. Haven't they dissapeared now? 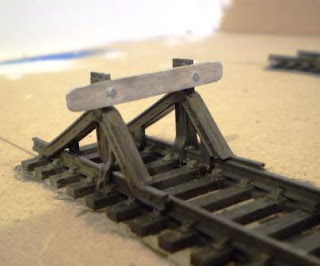 What I wanted was something in the style of the set at the end of the headshunt at Newhaven which are still there, albeit marooned and covered in muck. The board of these is pretty lightweight. It looks no more than a large floorboard. This replicated here by tossing the PECO iron part into the scrapbox and replacing with a length of coffee stiry-thing with the ends rounded off to match the prototype. A bit of white and pale grey from Humbrol and some Charondon Granite from G*** W******p does the job. One has to wonder the point of these. Even at walking pace a Cl 08 would plough straight through. Let alone the Cl 56s that laterly worked the Newhaven ballast trains.

For the buffers at the end of the rails in the distance I have in mind the set from Barton-on-Humber with the lamp on a stick and a ladder. I'm sure I have another PECO set somewhere.

I note that RM are leading a Newhaven Harbour layout for next month. Hope I won't be dissapointed.
Posted by Chris Ford at 09:39