After a bit more of a return to 009 this week - more of that later - thoughts turned to the small pile of chassis in the drawer. We had a 60hp Kerr Stuart running on Wood End, it was sold with the layout and as far as I'm aware is still with it. That particular model was a bash using the Meridian kit bonnet, a stretched frame and slightly longer cab to fit over the Bachmann diesel. I read recently that the Meridian bonnet is a bit short so laid a Bachmann chassis over a Wessex mob drawing that I'd found in a folder. 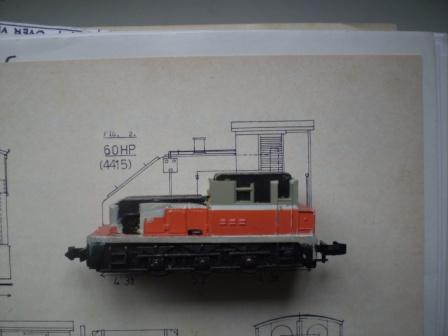 Now without checking the bonnet does look longer and the chassis fits into the drawing with a couple of mil to spare; although optically it doesn't look like it here.
Just out of shot is the 90hp version which is about the same size, but without the distinctive bonnet. Could be two diesels comming up.