Countdown Worthing and Rhiw's first (and possibly last) outing - a month to go. So now the pressure is on. 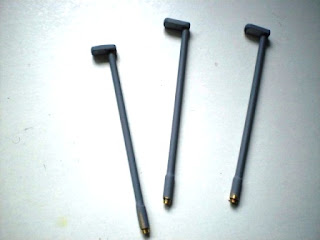 As was quite rightly pointed out the platform is still a bit bare. First on the list - lamps.

I looked at the RTR versions at G**gemaster... four quid each. Maybe that's cheap for some people, but despite what maybe said I still regard myself as a modeller first. It's only a bloody post isn't it?

I raked around in the boxes in the loft and found some brass rod of about 2mm diameter and some tube that fitted over it. Can't remember why I bought this, but it would do the trick. I built one as a trial and the other two as a batch. Can you batch build two? Anyway...

I guesstimated posts at about 16' high so rod was cut at 64mm +2mm to drop into the platform - a bit of unusual forward thinking. The head was a slice of Evergreen strip 80x188 thou, that I think was originally for solebars or something, drilled 2mm at one end to take the rod and with all the corners rounded with a CF sanding stick.

The tube for the 'foot' was cut at 8mm long and soldered onto the base of the rod leaving the 2mm prong. The solder being allowed to form a bit of a fillet at the top. This was rubbed down to form the angled join of the lampost. The head was fitted at a jaunty angle with superglue, the whole lot 'keyed' and then a quick blast with Halfords primer. Crude -yes but cheap and looks like a single modern lamp.
Posted by Chris Ford at 09:48