I touched on the Groudle Glen briefly in the Bagnall-build epic. Below are a few more from the same set taken in the 1990s. For those unaware the GG is a short 2' line running from a wooded area (below) along the clifftop to the site of a 'zoo' hence the names of the original locos Sea Lion and Polar Bear. 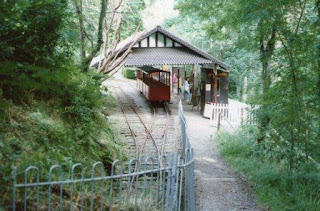 As far as I can recall the line has only influenced one model - Laurie Cooksey's O-16.5 Fairlight Glen which appeared in RM in May 2002. Laurie's piece was not much over 4' x 2', but what about bigger? 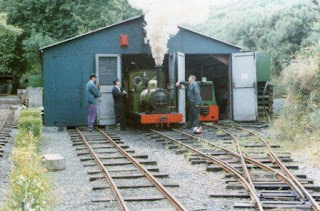 We tend to think of small simple plans like this in terms of small board portable layouts, but they would actually be perfect for a small system running around that otherwise useless 8x6 boxroom over the stairs. With say the sylvian station and loco shed on one side and the 'zoo' on the opposite, with the clifftop section in the middle in front of the usual window. 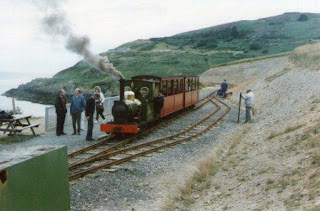 The pleasure would be in the gradual build of the layout and the (scratchbuilt?) stock. Operation would be limited, but not if you apply American carload principle and use a card or dice system of loads to available stock. If the rather politically incorrect zoo was changed to some sort of small industry (fish?) then this would work very well for a one-man den layout. Any scale from 7mm to 16mm would work in the space.
Posted by Chris Ford at 10:50