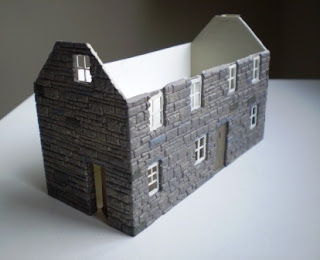 Friday saw a bit of painting being done. It was that do I, or don't I moment: is it better to paint at least a basic colour before the glazing goes in, or the other way around? I decided on the former, so a basic wash of Rowney grey acrylic, letting the cream of the plastic bleed through and a few stones picked out in that crappy Spitfire green (see the Spitfire posts) and German grey. Windows were touched in with Humbrol cream letting the grey undercoat bleed a little, and doors a mix of the green and dark earth.
Prior to that it will be noted that I added the back wall and floor from plain 6othou. That gives me two clear sheets of stone and one of planking to play with and probably do the station shelter at a later date.
Yesterday I picked up two of the suggested Wills kits (cattle creep and occupation bridge) at the Eastleigh show. In the posts below I mentioned admiring John Bruce's work with Wills stuff. Who sold me the kits...? John Bruce.
Posted by Chris Ford at 09:33