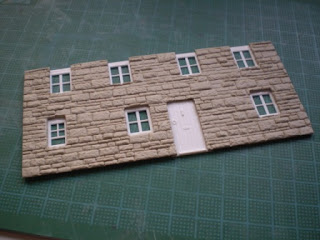 Basic walls cut and opened up, the windows and door were added - from the front I may add - laying the wall over the frames one by one and dropping a dab of solvent into the corners. Easier to line up that way. 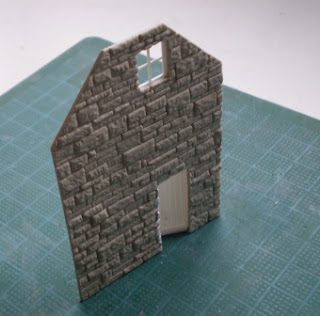 My main deviation from the plans was to lose the twin front doors and use the end wall. The kit comes with 'front' and 'back' doors (don't go there...). So a hole 27 x 12 was hacked in and a slimmed down 'back' was set in an open position. Above this a 10x11 hole was removed at attic level and a section of one of the large windows, which were otherwise spare, was bolted behind it. 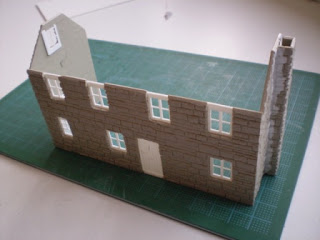 The three main walls fixed at right angles and reinforced with the little semi-translucent strips which I took to be corner braces even though they look like something you put in your mouth when you get your teeth X-rayed. Note the chimney at one end and the Tip-ex used as a filler as I had nothing else to hand.
Posted by Chris Ford at 09:05