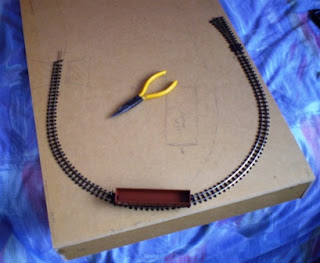 There have been discussions on and off about something circular in 009 for a while, mostly pertaining to the possible extension of Garn. The disposal of that has prompted just such a beast in compressed form. The influence being the two articles in RM on Dolgoch in 80/81 with such a style plan and an Irish ng layout called Union Mills in the late 70s, again, effectively a simple oval plan. Photo 1 shows the first curve going in and testing. Laid carefully to an 8" radius centre and easing to 9" on the exit. The Lilliput open used to check that the overhang does not pass the baseboard edge. 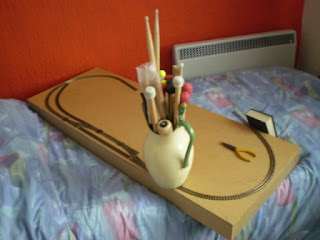 Photo two shows the pointwork in place. I was able to do all of this quite quickly as the points are not wired up - I rarely do this for storage yards. Curves were UHU'd, and pinned at about 6" intervals and checked all the way for dog-legs.

Complete in a couple of hours. The board was lifted and the wagon 'tipped' so that it ran round all roads by gravity. All appears well. Now the track is in place , the rest of the woodwork can commence. I didn't want to cut track beds unless I knew that the curves would work OK - there ain't a lot of room.