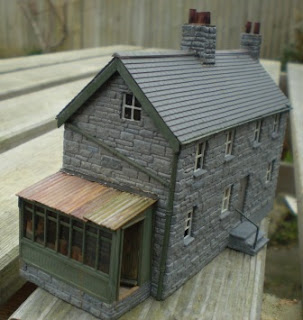 Done. At long last. For some reason there looks like there is a dodgy joint in the chimney in this shot even though it's one piece. The whole thing has been jacked up by 8mm all round to allow for sloping ground falling from the far end. I want to bed this in so it looks built and not placed. So the scrap-built steps mark the higher ground level and the steps to the back porch will be added later. So onward.

However just for ICR...conclusions:
As a kit it's a bit of a curate's egg and like my favourite joke about directions asked of an Irishman, 'If I wanted to go there Sir, I wouldn't start from here.' If you want to be led gently through building a cottage with Wills sheet and are quite content to follow the plans, it's OK. If not, then your own plan/idea and some sheets would get you there more cheaply. I only used half to two thirds of the materials in the kit - there's enough left to do the station building. I quite liked the stone sheet, but whether brickwork would be as forgiving I'm not so sure. The other bits I like a lot: window mouldings and chimneys save a lot of time and I'd recommend them. The slate sheet is another thing altogether. Sorry but I'd go with the Slaters or strip-work any day rather than fanny around trying to thin this stuff down and when it's on it looks a bit too uniform to my eye. Would I spend twelve quid on the kit? Probably not. Would I use the constituent bits? Yes.
Posted by Chris Ford at 12:21