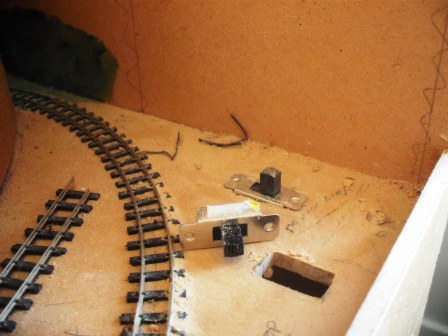 I forgot the switches.
What I do opposite to most is the ballasting, preferring to do it almost last after the scenic stuff is down. Though here I was cursing that decision as getting under the bridges took on almost gynecological techniques to complete. Then the bloody PVA wouldn't bond so I had to go over it again. So much screaming at the layout in the last couple of days. When it came to the testing and chipping off the odd bit of stray ballast I remembered that I was going to sectionalise the track so that I could kill a train in the 'station' while running around things at the back. A bit like DCC only at a cost of 50p (actually less than that as the switches are Nigel's cast offs being non standard 'centre offs'). Note there are no fixings - they're held in by tension in the MDF only.
I have two weeks left to get this finished.
Posted by Chris Ford at 09:28