Mid Hants in the rain 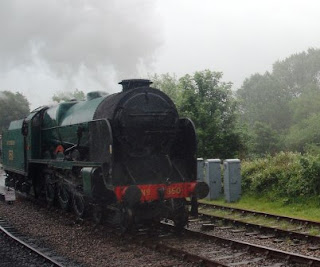 After a week where most days ended up in what looked like a National Front rally it has thank goodness quietened down a bit. I pondered for a while how Scotland's departure may change things: the Union Flag would have to go and be replaced by something  more 'right on' with a bit less blue in it, we could get rid of the 'Great' bit (hardly applicable anymore is it?) and replace it with something more geographical and less pompous. Southern Britain would be my choice although Ulster doesn't quite fit that does it?

Yesterday saw a trip to the Mid Hants in the pouring rain with Mrs F's granddaughter - a four year old who had never been on a train, let alone a steam powered one where she could be hung out of the window, be invited onto the footplate and go home with a filthy coat. Not a line I'd rush to visit again - mainline steam yes, but little access to sheds and not the most inspiring ride. In fact if I hadn't had the company of a little bundle of calories with a strange interest in the mechanics of screw couplings and hoses I'd have been disappointed.
Posted by Chris Ford at 11:55