A bit of a modelling fest yesterday. A list was made of things to be done and a start made. First up in the morning was this fairly modern NSB van for  Svanda with what looks like turn and slide doors. A layer of gereral filth on the underframe was added, some corrosion on the walkway grills and finally some rain steaking. Possibly too wet now I look at it today. Then some basic work on human figures of which more later. Then to Crawley where a little more scenic work was undertaken on Svanda.

Below is a sneak preview of Nigel's mill building for the Norwegian epic constructed in Evergreen plastic with just the remaining roof section to do. 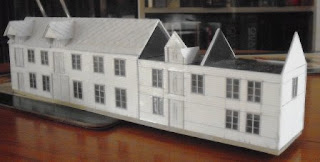 Apropos nothing, except one of the other five year plan possibles, a couple of the old (almost 20 years!) stock items from Einsford Mill were placed on Svanda to see how they felt in the space bearing in mind that it's the same scale. First up being the original SW1500 bought in Victors in the mid 90's and drastically re-worked with loads of brass. (See the top end of the sidebar for a liitle more on Einsford)