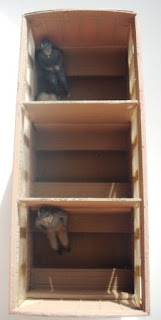 Another one of those tidy up jobs nearly done. I bult  a pair of 7mm (ish) Minicraft coaches probably 6+ years ago (there are four more to do). The kits prior to that were something of a holy grail and there was at least one maufacturer who ripped-off the moldings thinking they would not reappear. With a couple of modifications the coaches aren't a million miles from Tal-y-llyn shape and size though I believe are 1:45 scale  and 3'6" prototypes.

Now with three wooden Slaters figures in I can get the roof on. With the shirt packet 'glass' slightly yellowed over the years they are almost invisable, but just enough to give a little life.
Posted by Chris Ford at 11:00