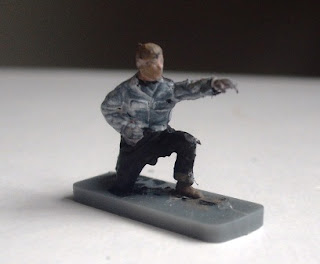 I'm a fan of using Airfix military figures for non-military poses. Pluses are that they are dirt cheap and readily available, minuses are that they need a bit of work and are made from a soft plastic which feathers if filed or sanded. This little chap was German and holding a small bomb, but will shortly be spinning  the wheel of an up-ended bicycle. This is half painted with a single coat of black, with flesh and hair on and the white shirt half done. This is cruelly enlarged by some 400% and the feathering shows here and not to the normal naked eye.
Not surprisingly I'm still working of details like this for Tal-coed. There's not not much left to do now. 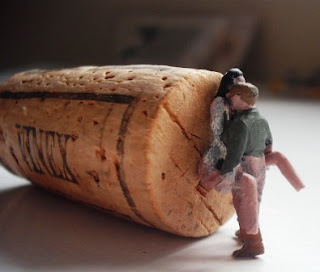 Addendum:
A while back I was chatting to my old mate, hairy biker and all round good egg Simon (sometimes commenter here). I quipped that what Tal-coed needed was a knee-trembler under the bridge. A couple of weeks a go Si asked 'So did you do the knee-trembler? I admitted that I hadn't. But as he asked...
The poor girl is from the Bachmann range, is a bit heavy in the rump, has had her legs cut off and replaced with two bits of bent sprue from a PECO station kit (the sound you hear now is Sidney Pritchard spinning in his grave) and has no feet. This is obviously of no concern to our lucky gent who is on leave from the Airfix Luftwaffe ground crew and has had his toolbox cut off.
Don't make up your own jokes chaps...
Posted by Chris Ford at 11:10