So what's wrong with Ashburton? 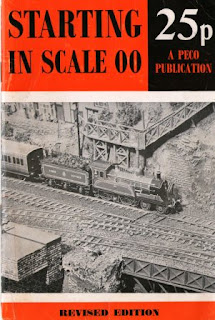 I've noticed over the years that whenever Ashburton is mentioned, it gets a derisory moan, which is a bit of a shame. Being that there has been an amount of email discussion of late regarding some of Barry Norman's plans in MRJ I thought it might be fun to re-examine the old stager from PECO.
I first came across it in the above booklet bought c. 1975 (is it still in print?) The author is not credited though the inclusion of the plan below indicates that CJF had a hand in it; especially as the accompanying photo is credited to him elsewhere. It is suggested in the text that 'Ashburton can be assembled in three months.' I love the use of assembled rather than modelled. But furthermore he then argues against by saying that ' ... a line of this nature is inadequate.' 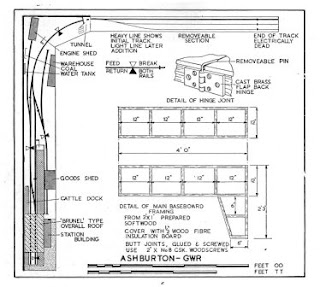 OK, so it's not Kings Cross, but it has been the basis for at least two classics (Buckingham Mk 2 and Charford) and probably many more. CJF probably only intended it as an initial exercise, but it's got a lot of potential. For instance, keep the train shed and put coal drops on the mill siding and it becomes instant NER. So sticking with GWR isn't compulsory. There has always been some complaint that the goods shed is hard to access. I don't see this as a problem and anyway if it was then a small degree of awkwardness is always preferable to keep the operator thinking.
For me it gets a thumbs up.
Posted by Chris Ford at 09:23