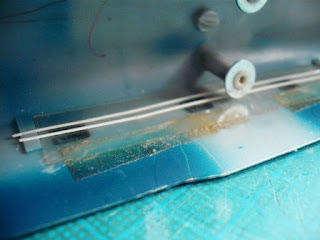 When I was ten, my dad took me into Gamleys in Brighton and bought me a train set for my birthday and I suppose I've had a train set ever since. What was included in the set was an oval of track, a point, a half curve, a short straight three wagons and a Brush Type 2 as Triang-Hornby were still insisting on calling it. Though being a green one, it probably still was. And there lies the root of this short exercise.
As I said earlier the point of the project was not to produce a super-duper detailed 31, but to get one running and give it a little life using the Monty Wells article for reference. 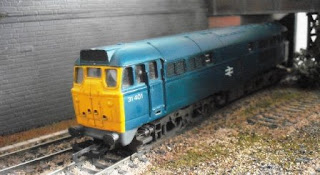 The Arty Bits.
For some reason the bufferbeams were painted red  - steam style. Even a cursory glance at a photo of a 31 shows that there is a grimy recessed beam carrying the coupling and pipework. Adding pipework would have been a waste as it would foul the tension-lock coupler, so I 'improved' slightly by painting out the red and buffer housings in GW grey. Similarly weathering the bogies with my usual concoction of rusts and grey. The photo that I linked to in the first post shows  31 401 in sparklingly clean livery in 1986, I limited myself to dropping some black into the grilles and wiping to add some depth, and while the brush was full, blacking out the headcode boxes. The white dots are stumping me though. Tried painting them... ahem... that didn't work. Advice welcomed.
The only other visual change was sticking some microstrip behind the engine-room windows to represent the internal handrails.

The 'finished' 31 crawls around Rhiw very well. Still a little noisy (who needs DCC sound?) but very controllable. I'd go as far as to say equal to the newer Bachmanns. It's far from state of the art, but I'll wager that it will see quite a bit of use during the next couple of exhibition outings.
Posted by Chris Ford at 12:15