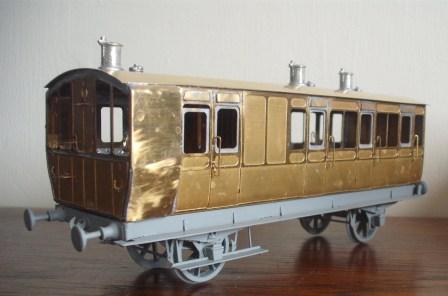 The lamps are done.
The roof was lined up as best I could and soldered on. The area around the pre-drilled holes tinned and after quite a bit of cleaning up the castings were fixed. I was asked whether I used a variable temperature soldering iron. No I didn't: 1. I wouldn't use such an expensive woosey bit of kit and 2, even with a 40 watt iron running at full belt it was hard to get enough heat going to get the 145 deg' solder to flow, such is the degree of heat-sink in something with this much metal. Everything is soldered save the steel to w/metal joint on the buffers which is superglue. I don't know why there is such a phobia about soldering. I started at school and have learnt more tricks as the years have gone on. Once you get a few basic principles in place it's pretty foolproof.

Now it's time for a break from the brake while I do other more pressing things. There is still much to do on it, but it'll wait another decade.
Posted by Chris Ford at 10:47