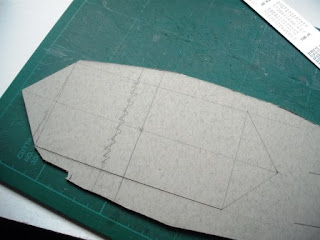 A few days ago I put the Roxey coach to one side for 'more pressing projects'. The Q Kits industrial is one, but I need to sort motors out. The other is all the trees for Svanda, but I need to be in tree mood as its all a bit messy. The other is the continuing drip,drip of small projects for Upper Dodsworth - the 7mm ng plan. I'm hitting this from a reverse direction to normal. I felt that what I've usually done is build baseboards, then track, then other stuff. This time I wanted to get a nucleus of stock and the buildings finished before the track went down. This is largely a matter of real estate - what I don't want now is another space grabbing bare baseboard in the house. 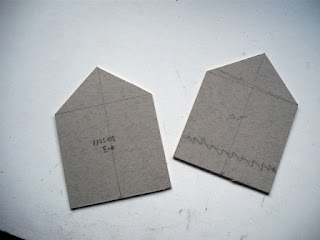 So this morning a bit of cutting of waste 2mm card. The ends of the station building. That sounds rather grand - in fact its a Bristol and Exeter platform shelter. Big enough to look like a station and small enough not to over-power a small layout. The design taken from Bob Phelps article in the August 2010 RM. Warning! it's not to a recognised scale. The implication is that it's 4mm so I blew it up on Mrs F's copier by 175%...huge! It's actually nearer to S at somewhere around the 4.8mm mark. so I converted the measurements manually.
Posted by Chris Ford at 12:25