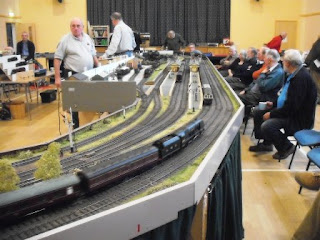 It would be very easy to take a pop at the God's waiting room aspect -I was one of three under fifty and there wasn't many more under seventy which raises all sorts of questions. However the couple of hours spent in two rooms both containing large test-tracks as above were thoroughly enjoyable and the atmosphere with several 7mm passenger locos running at once at a reasonable speed was wonderful. OK the operational aspect was basic, but fun factor? This is what club exhibitions used to be like before the rented travelling circuses of pissy little layouts in boxes became the norm; I suppose you could liken this to town football clubs starting to buy players in post war.

There was though an element of friendliness's that you don't get at shows now. An exhibitor may talk about his layout or scale, but will rarely encourage you to play or join the club/group/team. Here it was different, though looking at the demographic it would have to be said that it ain't working. 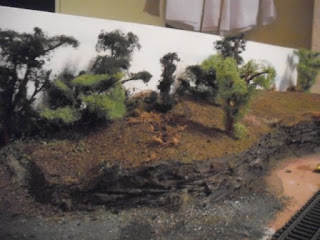