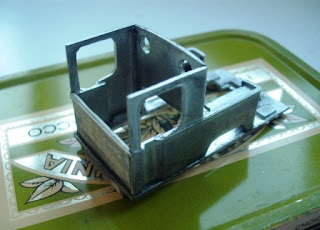 First point to note is that the kit has been shortened, i.e. there's no bunker. Second point is that I think the kit was part of the range that was designed to fit on the now obsolete Ibertren Cuckoo. This meant that the previous bit of work that I'd done on it was to open up the footplate to take a Fleishmann 0-4-0. This made it very flimsy so I got the cab sides on to stabilise, adding a plasicard sheet and a bit of 20thou strip. 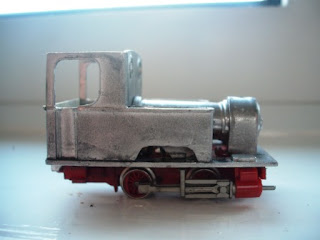 The Chivers range has been the backbone of 009 modelling for years providing reasonably priced w/m kits to go on RTR chassis. They are not always fondly spoken of though, often being referred to as Chivers white metal blobs. Unkind, but they do need a fair bit of fettling to get to fit. The smokebox sits in a step down in the footplate while t'other end of the boiler hangs on a hook on the cab front. As can be seen above it has essence of dragster and an hour or so of careful filing was needed to get it to sit level.
Posted by Chris Ford at 11:33