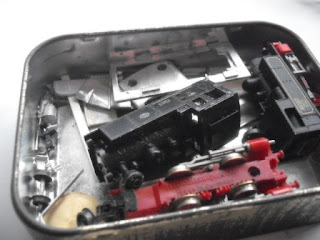 I don't really buy into the whole New Year resolution game. However, something should be done so I'm sticking my head over the parapet and saying that 2013 will be the finish off year, I'm not buying anything else until 2014 unless it's bits to complete something.

There is a list: Svanda needs completing before  Croydon in October - that's only 37 weeks away. Sounds like ages doesn't it? There is the 7mm station building to do now as I'm in possession of umbrella guttering. And of course there is the Stroudley coach which only needs a couple of steps soldering on and painting. But that's a summer job really.

There are in my loft and in the desk drawers probably 40 unbuilt kits. I suspect this is not uncommon and more on this particular issue later. For now the top drawer and the tobacco tin which gets moved on an hourly basis. Inside are the parts to build some or all of a Sklark. I've been watching Mr. Campbell's build of this over on his blog. He however started with a new kit - this is someones shortened bash. I can't remember where it came from, but it's time it was shifted into being ready for Shepton maybe. 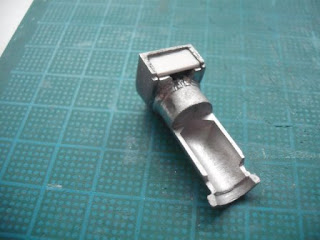