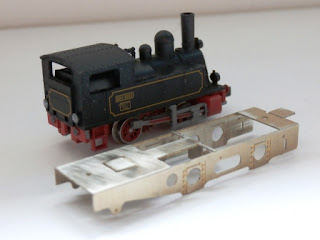 A sigh of relief and a bit of a pause in proceedings. Svanda has now left the building for the last time and is now joined together in Crawley. I'm sort of glad to see the back of it. It's funny how some things are hard to visualise, and this being based somewhere that I have no experience of made the whole project very sluggish. That's not to say it's finished; there are still odd bits of bushy stuff to go on that could only be looked at once the thing was put together, and there are probably two more batches of scrawny trees to make, plus some stock weathering. I've not been in my comfort zone for this one.

Talking of comfort zones the above may be the next small project. It's a Branchlines Hawk chassis kit that came as part of the Bevan-bundle. I dread to think how long ago that was now. I partially sorted out the modelling stuff in the loft and the marge tub that it was in got left out of the kits box. I then moved it twice to get at something else and thought I may as well take a look at it. I don't know if it's still available and it looks horrendous to build. It was hailed as a replacement for the Ibertren Cuckoo (pictured alongside) which it clearly isn't, having 4mm L&Y pug wheels, 1/8" axles and 25% more frame depth. There's no specific body project for it, but if it works it may end up as a gift to one of the 09 guys I know for which it would be perfect. 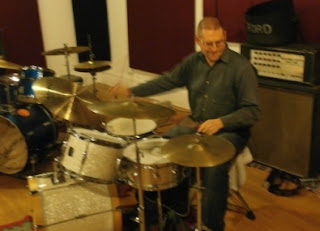 Talking of comfort zones again; something I've been apprehensive about all week; a 5 hour run-through prior to the 54 North dates later in the spring. I don't usually do 'band' things. I'm more your 'turn up-play-go home-wait for the cheque' sort of bloke, but I said yes to this which is sort of Fairport meets Keith Richards meets Shane McGowen So the tatty Gretsch got pulled out of the cupboard, and Thursday was spent in what can only be described as a squat with recording studio attached. My life is glamour all the way...
Posted by Chris Ford at 10:44