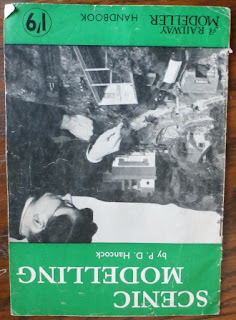 Yes, I know don't tell me. I've tried several different versions and Google insists on flipping the photos. *sigh*
Continuing the occassional series on modelling books of the past.

The above was mentioned in one of the comments a couple of weeks back, and by coincidence a copy was pressed into my hand the same week.There's no publication date, but the price and the hand of CJF in the production would point to the mid-sixties and I assume was within the brief of the 'Shows you how' pamphlets produced by PECO.
It's a bit on the light side and PDH seems more interested in the fact that you should find your own way of doing things. Plus points are the inclusion of his 2mm Gleish Valley Railway on a 3x2' board and the classic Hancock artwork and cartoons.

PS: I'm grateful to CP for expanding the research further and emailing me with the suggested publication date of 1953/4 (working from RM adverts) and extra to that, that it would seem that there were two editions, this being the first. The second, as I guessed, added 'Shows you How' to the lower title. So was this the first of that long running series of pamphlets?