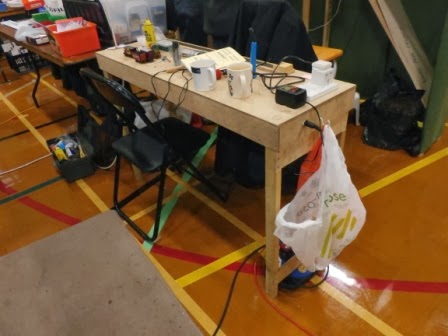 A quite exhausting weekend at what used to be called Eurotrack (but this year wasn't). Compounded by having to toddle off to work afterwards. Svanda behaved impeccably with only mainly self not changing points or flicking switches causing any problems. I'm continually surprised by the amount of interest it gains for what I considered to be the quite minority subject of Norwegian State Railways in the 1980s. Two invites were gained which surprises me further.

The above is the workstation of the New Forest club. I'd seen this before when they were next to us at Salisbury, and here they were again. It's 3' long and 2'6" high and is effectively a short fat paste table with fold-up legs triangulated on the other side. Note the permanent test track at the back, the two gang power socket on the right and the din connector for the controller RH end. Great idea,no more scrabbling around for a flat surface to clean wheels and do minor repairs as well as a handy mug stand. I suspect that at some point it may have been destined for use as a baseboard and that again may be worth considering - no stands, no trestles, no fuss.
Posted by Chris Ford at 10:32