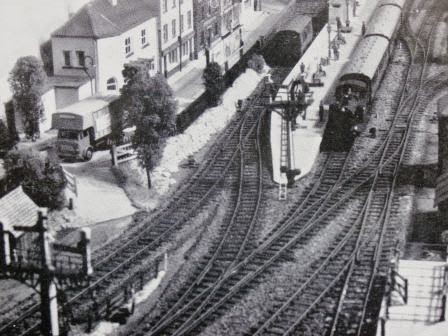 The second of the pre 1970s inspirationals is another home (or shed) based system in 4mm/OO, The Berrow Branch. Although it changed quite a bit shape-wise over it's lifetime (into the late 70s at least) it was nominally about 8' square in various combinations of straight, L, or U shapes and usually contained two stations - Berrow and a tiny sub-branch called East Brent. Possibly a little more scenic-ly advanced than Charford and very heavy on signals it used commercial track systems, mainly Formway which shows up well here. The inspiration with Berrow was that it demonstrated that it was possible to build a very convincing and railway-like scene using off the shelf equipment and a few basic kits. Moreover one which represented and actual place and possible line that the S&D could have built. In other words it stood out from the very freelance trainset layouts of the day.

The plans were published in RM and also in at least one of the 60 Plans' books. Though the warning was and is, that it used not only tight curvature points that would be pretty unacceptable today, but also the dodge of the underscale coaches that were produced at the time. Meaning that thinking that it would be possible to replicate Berrow now, probably wouldn't work due to the raising of RTR standards. however a lot of the stuff IS still around and an upgrade to modern running would be possible. Though whether you would want to stick a Bachmann Jinty or 3F next to Triang stock is a whole other question.

It would however be possible to get close to the ethos of Berrow now, and the appeal of a non-exhibition (although it was exhibited from time to time) is great. Though due to the points made above I can't help thinking that the way to go now would be to go 3mm and use the PECO 12mm track in the same space to counteract the short stock issue.
Posted by Chris Ford at 11:14