A salt and battery 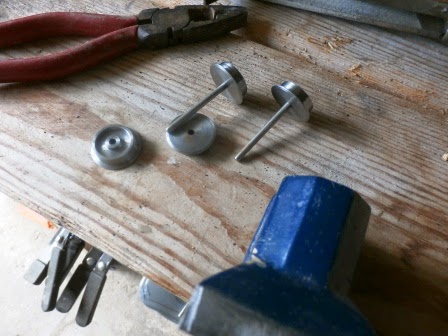 Nigel wandered round last week and we spent the afternoon out in the sun throwing a few garden rail ideas around. But it was decided that I should get a loco up and running at least in basic form to see if the idea really bites.
I'll get a Roundhouse steamer I thought... err no they cost more than my entire profit for the year so off it was to the IP Engineering for a 'Budget battery chassis' for 26 quid.
I spoke to Mr. Engineering and he said he'd pop it in the post - it arrived this morning in a jiffy bag - a 16mm loco through the letter box. Fine service I thought. What do you get? Well a bit of steel U section pre drilled with nine holes, two wheelsets all nice and shiny, gears and battery holder and a motor. I have this lot together in half an hour I thought... what a prat.
First mental shift: I need a hammer to tap the wheels off - a hammer! So out came the vice and off they came. What fun I thought, and what fine value, why you can't even buy a blow up doll in Tescos for 26 quid. Remember Tescos?
This being single axle drive I put one of the wheelsets straight in. Great I thought, ten minutes and I've got half a chassis, I'll take a look at the motor. I read the instructions. Ha! instructions.... 'Fit motor with a couple of self tappers.' Now this is where it all started to unravel.I looked for self tappers in the bag... none. Then I realised it doesn't say ...'self tappers included'. This is bad on two levels. This is I assume a kit for someone like me with little or no experience of 16mm. If you said 'self tapper' to someone in the street would they know you meant a screw? First point. Second point - should this not have been mentioned before I bought the kit? After all fixing the motor is a bit of a critical part of making it run and let's face it not everyone has this sort of thing in stock. Even the size is not mentioned just 'self tappers'. Hmmm....
Luckily I'm in the habit of stripping any bit of electrical gear that goes kaput before I dump it. People think I'm stupid, but who has self tappers in a box? Moi. Clever eh? But not so clever that it took me a hour to find two that I could bodge into the motor casing without fouling the armature. 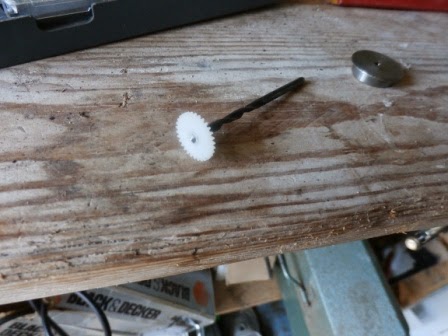 Onto gears. Plastic, nothing exciting. The worm went on the motor shaft no problem. The other bit of the set? Nah... The axle is about 1/8", the hole in the gear ain't. Instructions say 'fit and slide into centre'. Errm, the bloody hole is 1mm too small. Even with a bucket full of KY it's not going to slide.
I started by trying to ream-out with a square needle file. Not good enough. So I raked around in the toolbox for an 1/8 drill which I bought just for moments like this, and gently opened the hole up until it was a very tight fit and not in need of the instruction's recommended super glue. 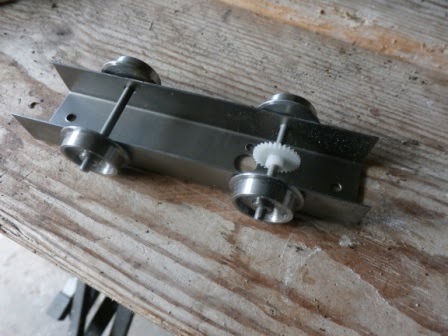 I re-fitted the motor and it all meshed beautifully. I then lashed up the batteries with blu-tack.
Second mental shift: I ain't on rails, there's no controller. If you connect it up it flies across the table entirely independent of any other being like a chicken on the end of a soldering iron. There's no knob to turn, you have to run after the bloody thing! This is definitely a work in progress. 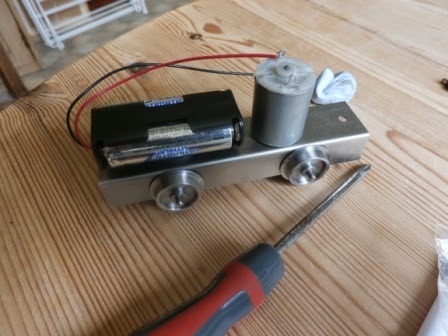 There are also two single pole two way slide switches included. Why? Wouldn't it be better with one DPDT like a controller with a centre off-right to go forward , left to go backwards and centre to sit still and smile at you. Maybe someone can explain this bit cos guess what, the instruction don't mention wiring or switches at all.
Apart from the screw, switch and hole issue (boy is this post going to get some interesting hits) all this for what amounts to the price of about three packets of fags is a bit of a bargain. Now, what to build on it.
Posted by Chris Ford at 02:29