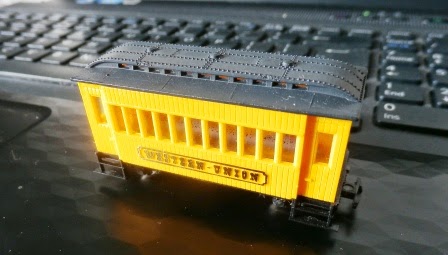 There is a little baseboard building going on in the form of a temporary fiddle yard for Edge. However never content with having just one thing going on in just one room I thought I'd tackle a project that I've had in mind for quite a while, namely the mating of an Egger Western coach with a Kato 103 chassis.

The inspiration for this is Graham Watling's two-car unit. His has a radiator strapped to the front; this though maybe electric or battery powered. This shift from internal combustion to a liking for electric traction, is the discovery of the Giant's Causeway line and it's development, and is also tickling my liking for street/horse tramways. The plan is to remove the roof and carve a hole in the floor for the Kato. The lettering is off on one side, but there is a window issue - as they're crap, but opened out? There is an odd number so a simple doubling of each one won't work. Small steps and see what happens.