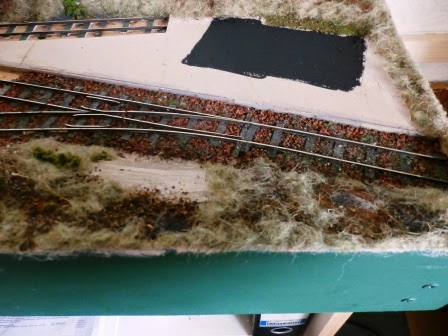 I searched around for some suitable ballast for this layout and now I'm not so sure. This stuff is from Modeller's Mate and is marked '2mm' which I reckon is the sieve size and not the scale, as they'd be boulders in N gauge. I mixed it with some similar size stuff from Laurie Maunder's left-overs and a scattering of fine ash, but it's still a bit pinky. I think this is why I never really get along with 7mm. Even though the stuff I've done in the past always gets favourable comments, I'm never happy with it - I can't seem to make it 'blend' the way that 4mm does.
Anyway.
While the buildings for the LH end are being constructed in Crawley, I though I'd get the RH end all covered, or as much as I can, hence the early ballasting. The gap in the middle foreground is for a water tower (another head-scratching situation) the black patch is the light killer for the station building. the grassy knoll looks OK in reality, but shite here and just like carpet, which is not surprising as that's effectively what it is.
Posted by Chris Ford at 01:01