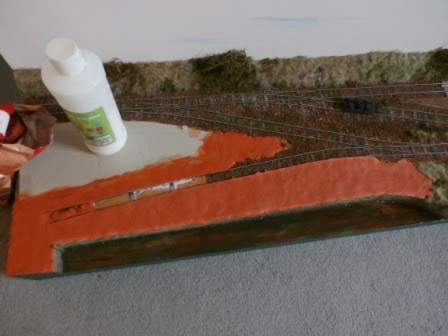 The whole are to the left needed to be covered in Das. I'd consulted the Oracle to ask what would be the best way of doing it. I'd done a small are on Edge with some left overs from Nigel's storeroom, but this was a larger proposition. The answer to my question was that as long as I stuck with the branded stuff all would be fine. So during a trip to Wales a while ago I picked up a large pack in a discount art shop in Llandudno, between working our way around Mr Robinson's coffee shop recommendations.
The Das was simply ripped of the block and thumbed into the surface after it had been given a coat of PVA which should help bond it all together. There is no difference marked on the packets other than colours (red or white) but this is definitely more clay-like than the white that I used before which has more of a papery weave feel about it.
From this point the track was in-filled and a Lima coach bogie with deep flanges run up and down followed by a Tri-ang wagon with wide ones. In theory there will be no powered vehicles down the far end of the siding so I could be sloppy with it, but ...
Posted by Chris Ford at 11:47