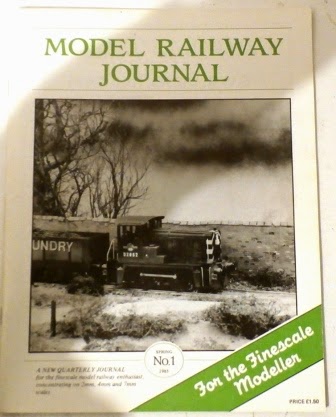 For one reason or another I've been spending time looking at magazines this week, mainly for aesthetics. I picked up MRJ No1, which of course wasn't the first, that being the preview No 0. Then I noticed the cover date - Spring 1985. My schoolboy maths makes that 30 years ago. Hands up who remembers this being the brave new dawn of modelling? On the face of it it's changed very little and certainly less than the others have in the intervening years. It's mostly in colour now, but the basic design has remained the same. It did lose it's way for a while; the whole issues dealing with one etched kit were a low point, but on the whole the classic feel of it has stood the test of time quite well and thank goodness it didn't go down the dumbing down process of having lots of pretty coloured boxes that all the others have. The hobby has changed a bit since 1985 and many of the torches that early MRJs carried have now become mainstream expectations Others though have not. The second article in this issue by Monty Wells complains quite strongly about kit component quality; something which has changed little in some quarters, but how many of today's similar pieces would be allowed to say so? Everything is rosy now - even when it's not. Is MRJ still the one true independent voice amongst all the pretty coloured boxes?
BTW I owe Richard a prize.
Posted by Chris Ford at 00:42