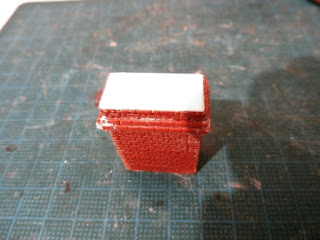 As predicted this is becoming a bit of a grind and is progressing very slowly even though I'm at it every day. The chimneys are done and on though with lighter strapping on the smaller and a replacement cap as above from 40 thou plastic on the larger. I couldn't see the point of butting together three smaller pieces from the detail sprue as suggested, when this will look far more of a one
Today guttering...

Although I've deliberately avoided making too much of a deal of it here, the launch of a Model Trains International replacement has probably gone better than I expected. Scale Rail International No 1 is all but sold out and No2 not far behind. I can't quite believe that No3 is already at the printers with an increased print run. It would seem that there is a market for a non-boundary publication that plays outside of the rules and regulations of the mainstream boys. Not that it was designed to compete with them in any shape or form, but in that there is actually a desire for it. Time and time again over the last five months I've heard the comment 'fed up with the other magazines'. Though it's hard to pinpoint exactly why. Maybe everything has got a wee bit too complicated and expensive for the 'average modeller' now. It's not that the big boys don't feature smaller achievable projects , as they certainly do - young Mr Parker's current essay in BRM is a case in point - but maybe the perception is there.