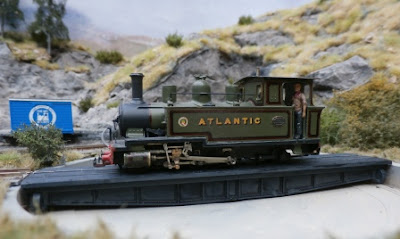 Saturday saw the 2015 ExpoNG at Swanley. Always a highlight of the year, not just because it's narrow gauge, but more of a social event as you tend to spend the whole day talking and catching up with people. Mr. Hill and I were attending with Morton Stanley so less time to walk around. Consequently I missed things, though there are photo galleries available via Mike Campbell's blog to your right. What did catch my eye and was a personal highlight was Tom Dauben's Isle Ornsay which after going to a few shows during its build is now finished and looks fantastic (above with Ted Polet's Atlantic perched on the turntable). What is a worry is the state of the venue which appears to be literally crumbling with huge cracks in the walls and broken floor sections among other things. Are the council letting it fall down deliberately?
Morton Stanley behaved more than adequately and there are questions around it. It was only really intended as a bit of fun to use some bits up and to tick a box. There were though several future unconfirmed invites on the day, so there are the questions of what do we want to do with it and why?
Posted by Chris Ford at 10:07