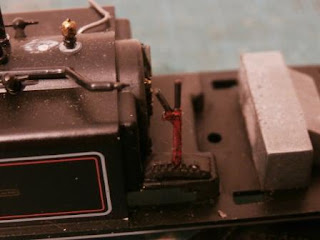 The Terrier detailing continues apace. Well if about one bit a day constitutes pace. The problem is research which is the time swallower. You'd think it would be easy with such a well documented class, but that is not always helpful especially when every single loco has had different modifications. I worked on the cab interior yesterday, giving the upper areas a wash of sandy brown and highlighting some of the moulded details. The lever above went well  to begin with, with a touch of red paint. When the cab went back on the attention is drawn to it. 'That looks nice' I thought until I spoted that Dapol used a standard plug-in part. This would be OK if the floor were level, but as can be seen there is a hump to accommodate the final gear wheel underneath. The lever now comes in at about 6' high so I had to trim it somewhat and even now it's a bit on the tall side.
The Westinghouse pump was another headscratch. There is an OK moulding on the loco but no feed pipes. the one going down was easy, but the one going up disappeared over the tank to who knows where, and while there are oodles of side views i couldn't find any from a high angle. Peter Bossom (also known as the wise man of East Sussex) came up trumps with an overhead shot. Now of course I realise that there's more pipework on top than I'd thought. The more you know the worse it gets. And people keep telling me freelancing is harder.... errr no.
Posted by Chris Ford at 09:33